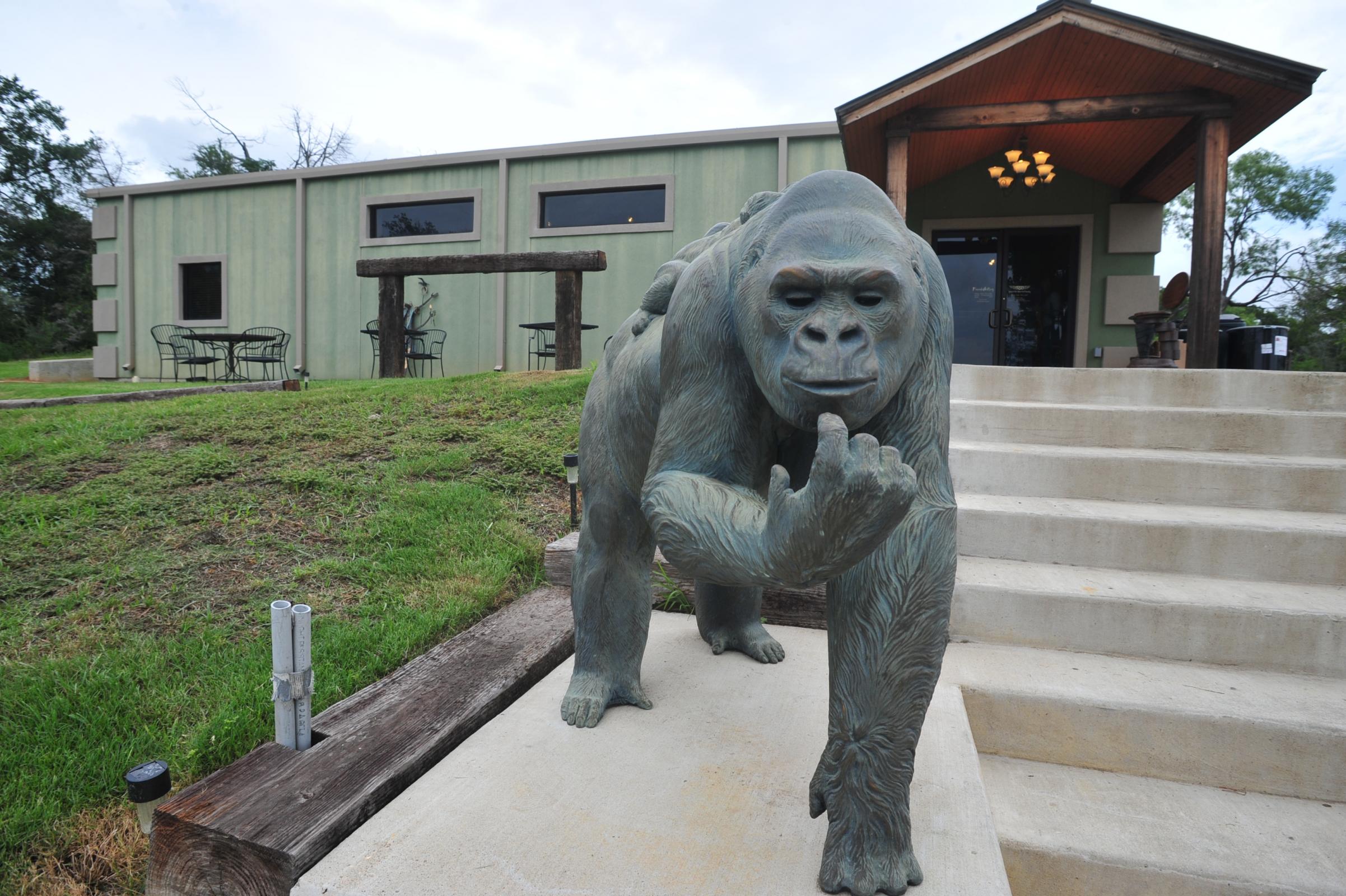 Deep in the Heart Art Foundry

Greeting visitors at the Deep in the Heart Art Foundry in Bastrop, Texas. (Photo by Terry Hagerty Photography) 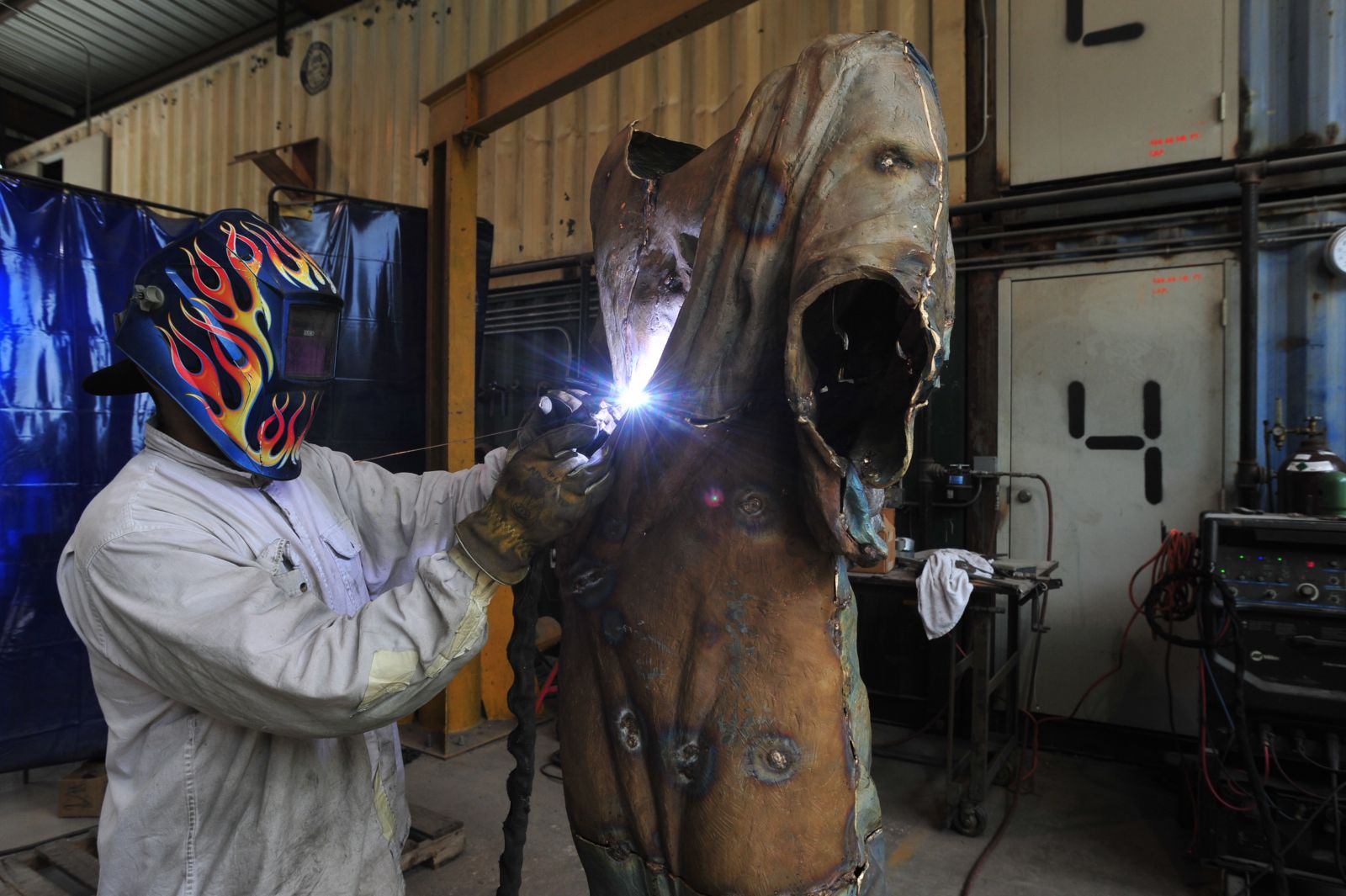 An employee at the Deep in the Heart Art Foundry works on a new piece. (Photo by Terry Hagerty Photography) 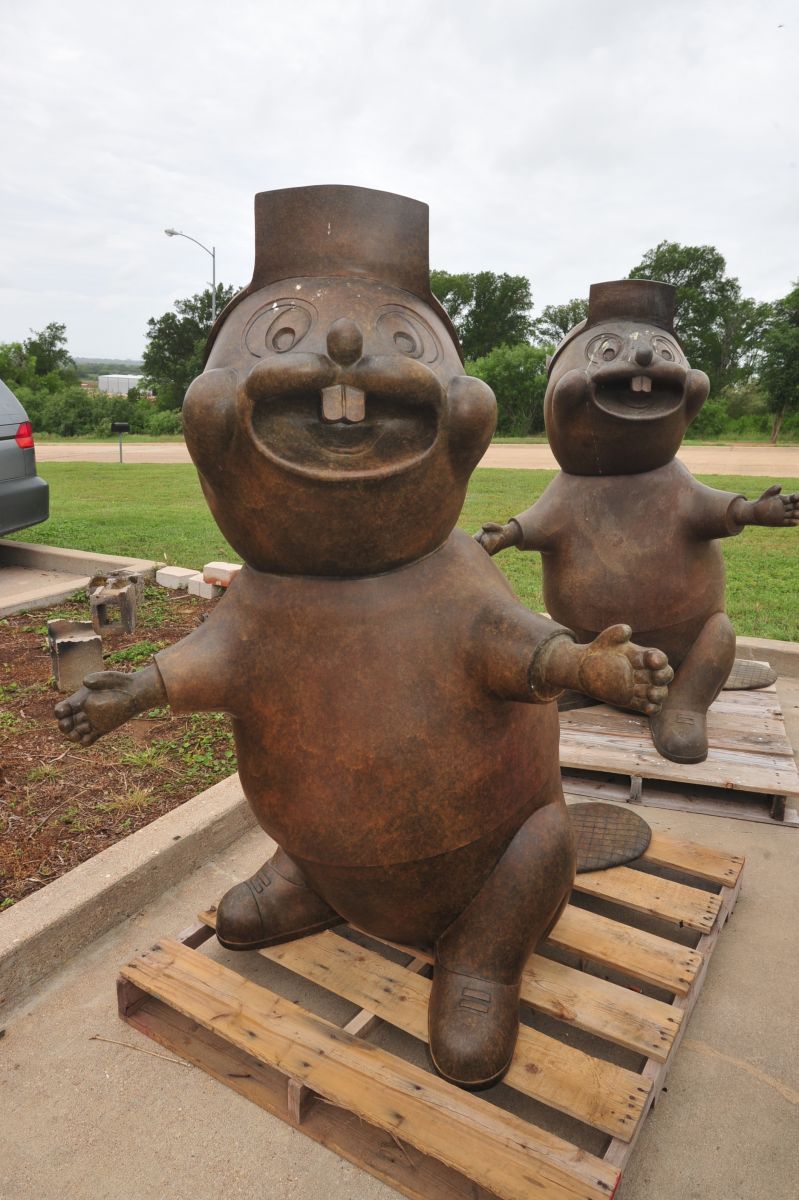 The iconic Buc-ee's Beaver, created by Bastrop's own Deep in the Heart Art Foundry. (Photo by Terry Hagerty Photography)

When Clint Howard purchased Deep in the Heart Art Foundry in 1999, the business had four employees. They soon outgrew their small facility downtown and in 2002 moved their business into the Bastrop Business Park. Since then, the foundry has expanded several times, now employing more than 40 workers.

The Art Foundry is one of Bastrop’s hidden gems. They are one of the few full-service foundries in the world. The Aggie Ring, the Vietnam War Monument at the Texas State Capitol, and the Waco Cattle Drive are just a few of their works. They also make the bronze beavers that proudly stand at each Buc-ee’s location in Texas.

Perched on a hill overlooking the Bastrop Business & Industrial Park, the Deep in the Heart Art Foundry is one of only three full-service, state-of-the-art sculpture factories in the United States. The other top two are in Colorado and New York.

What sets this trio apart from the dozens of smaller art foundries around the country is their capability to offer a full range of in-house services – one-stop shops where an artist, museum or city hall can access talent that takes a project from conception to construction to delivery and installation. A sculptor doesn’t have to consult with other sources for the highest quality mold-making, casting in bronze or stainless steel, putting the final touch application of surface’s patina or installing a piece in a public setting.

“At a lot of foundries, they do good work but often they have to contract out key stages in the foundry process. If there’s a problem or lack of quality in the finished product, there’s likely to be finger-pointing or lack of clear responsibility,” owner Clint Howard explained. “Sometimes a project ends up costing a lot more than necessary because there’s no experienced project manager who understands what it takes to make a piece the best it can be at every stage in the process.”

Now in his mid-30s, Howard purchased the foundry in 1999 while he was a college senior studying sculpture at then-Southwest Texas State University in San Marcos. Though only 21 years old, he heard about a small foundry that was about to close in downtown Bastrop – the opportunity to buy it and keep it going was too good to pass up, so he quit college 12 hours short of his degree and took charge of the 4-person, 1,200 square foot facility on Alley A.

Young Howard already had a track record of getting things done as well as actually running a foundry. Going back to 1956, his father and grandfather had run a construction business that not only built houses, but also was known as the go-to firm for restoring 19th century San Marcos homes and moving older houses to new locations. Soon after he started working summers in the family business at age 14, he was running construction crews on his own. “I learned how to manage people, keep them busy and effectively plan a project.”

He also learned how to use an array of power tools, so when he walked into the college art department foundry, he felt at home.

"I saw a bunch of equipment that I was very familiar with – belt sanders, table saws, welders. My instructor realized that I was very comfortable in that environment so he made me the teaching assistant for the foundry while I was still a freshman. It was my job to show other students how to use the equipment,” Howard said. “The next year, the instructor decided he wanted to focus on his own sculptures, so I ran the university’s foundry for three years.”

When Howard took over the Bastrop facility, in the first year he expanded to another building across the alley and by the end of the year, his workforce had grown to 12. There were several small foundries around the state but none were offering a full range of services – Howard saw opportunity.

"Traditionally, most foundries are small mom and pop operations that run about 30-40 years behind the available technologies. They just don’t have enough scale to attract the interest of vendors who can offer up-to-date technology,” Howard said. “I realized that I could get artists to send me virtually all of their core business, table top items less than 200 pounds, if I could promise an eight week turnaround time, from date of order to shipping the finished product. And we had to offer a consistently high quality of work, which could be accomplished more effectively with new technologies that allow us to eliminate casting flaws.”

But those goals were out of reach in a crowded, downtown location, so working with the Bastrop Economic Development Corporation, a 4-acre site on a hillside overlooking their industrial park neighbors was chosen. Besides the view, the location offered a key feature – it could be had for free, if an applicant met the qualifications. “The list made a lot of sense if you’re trying to encourage true economic development. They asked how much the building and equipment would add to the tax base, how many employees we’d hire, our pay scale, whether we’d hire locally or from Austin. We scored well,” Howard said.

And then, Howard leveraged the free land as equity on a loan to construct the initial building. Total out-of-pocket expense for the new location: $1,500.

The company now employs 43 workers – many from Bastrop and Elgin schools – in 22,000 square feet of production space. The facility’s location is particularly helpful because it’s zoned industrial and he knows there won’t be a new subdivision moving in next door, with neighbors complaining about noise or odors.

Asked what could make doing business in Bastrop better, Howard cited the lack of a college to feed the employment base. “I think virtually all our local businesses would be better off if we had a college here,” he said.

A sculptor himself, he cited his college training in the field as an asset to working with artists around the country. His own works include a life-size moose that’s displayed in the Columbus Zoo in Ohio, a heroic-scale firefighter in front of the downtown Bastrop fire station and the iconic Buc-ee’s Beaver who welcomes visitors to the convenience store rest stops around Texas. The foundry’s works by other sculptors include Banjo, a velociraptor on display in Queensland, Australia, the massive Aggie Ring sculpture at Texas A&M, and the complex Jacob’s Dream at Abilene Christian University, among hundreds of others. at age 14, he was running construction crews on his own. “I learned how to manage people, keep them busy and effectively plan a project.”