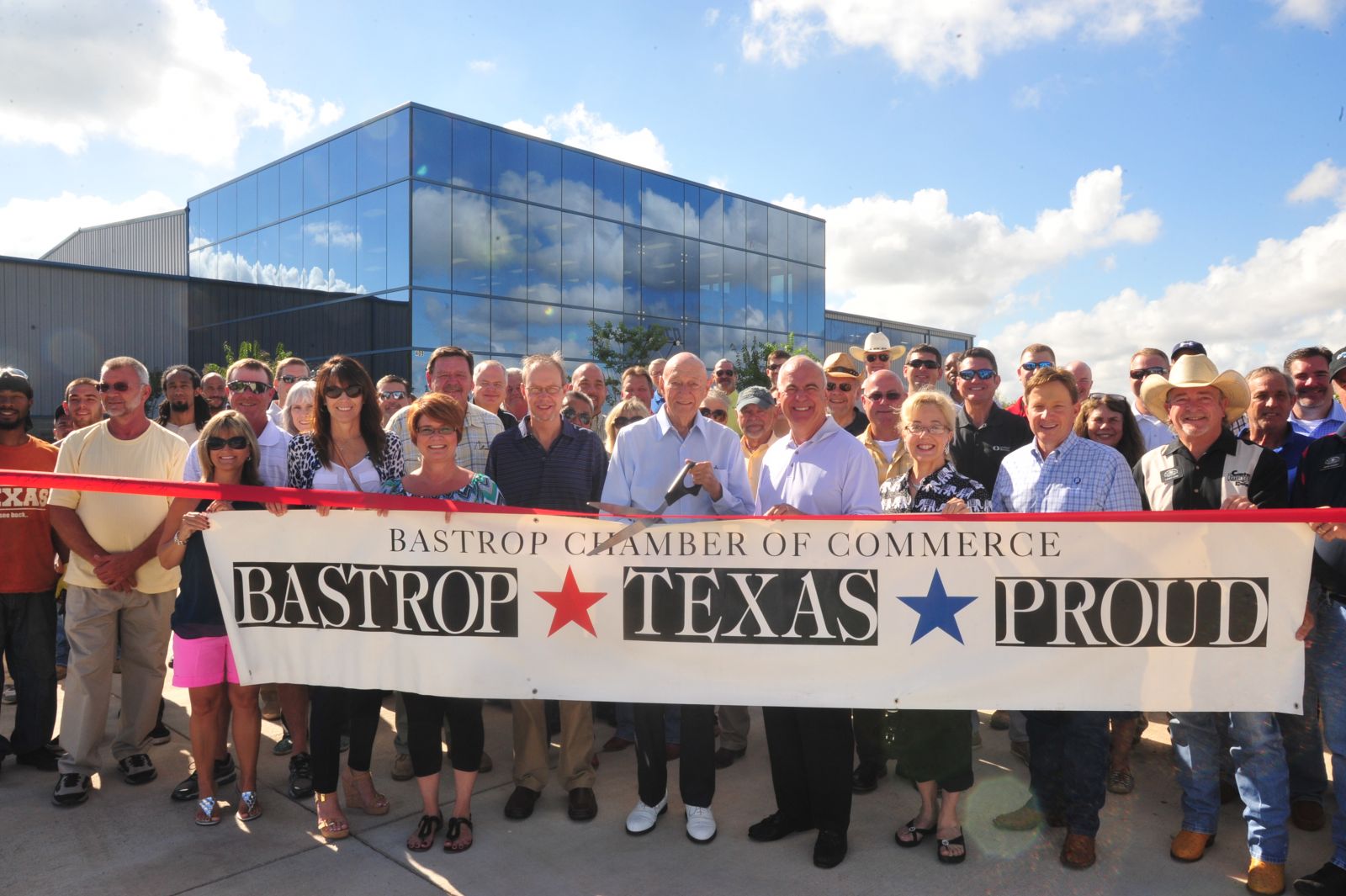 A Ribbon Cutting was held for the newest tenant of the Bastrop Industrial Park, JAMCo, Inc, for their new Texas headquarters. (Photo by Terry Hagerty Photography) 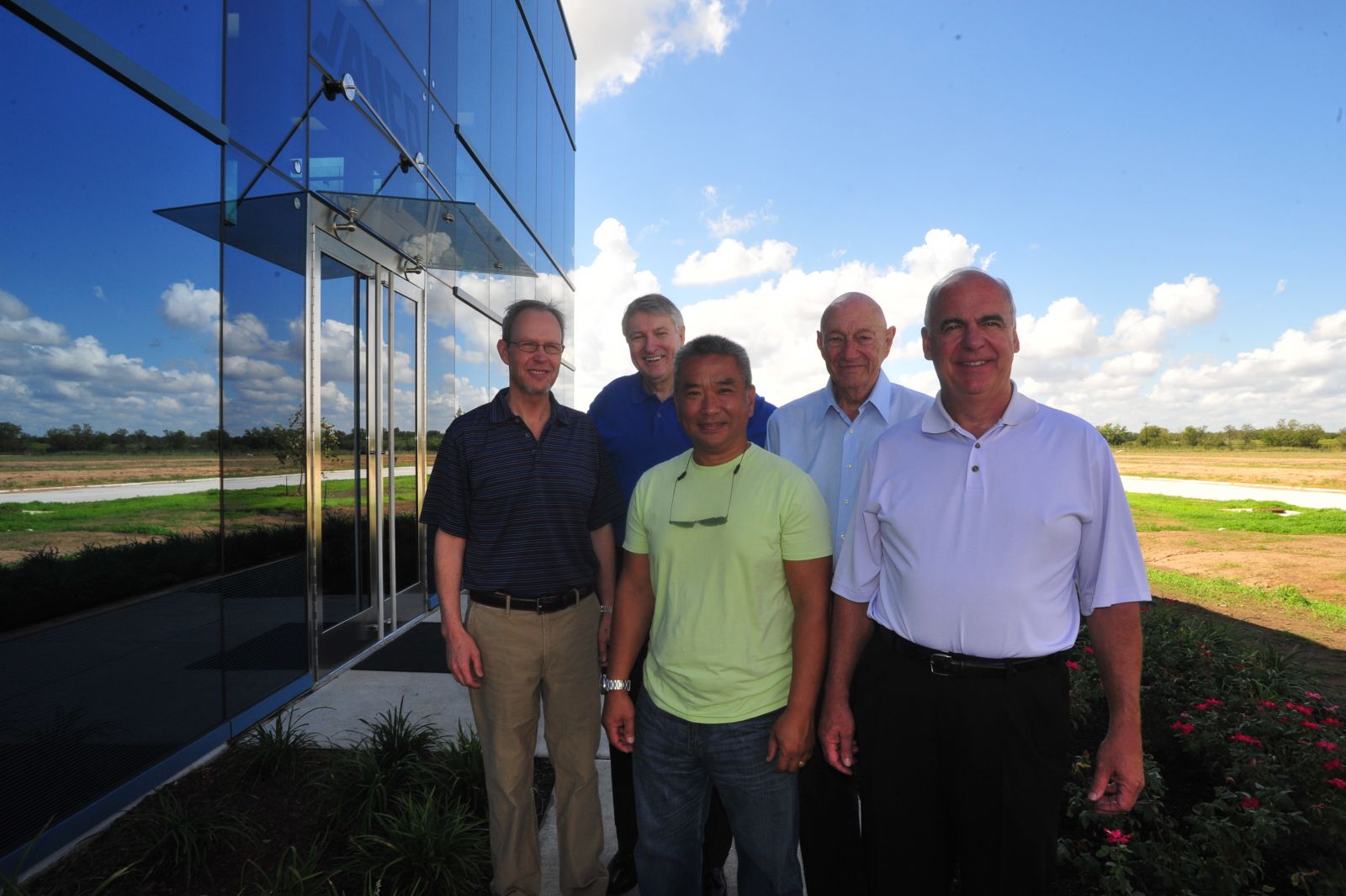 In 2014, Johnson Architectural Metal Company (JAMCo) opened a new 40,000 square foot facility in the Bastrop Business and Industrial Park. Based in Marietta, Georgia, JAMCo designs, fabricates and installs exterior envelopes for high-rise buildings. With an increase in their business in the Central Texas area, they saw a need to establish a regional headquarters in the area, and felt that Bastrop offered both a centralized location as well as a “great energy.” JAMCo’s CEO said it was Bastrop’s central location that interested them. They have clients in Austin, Houston, Dallas and San Antonio, all within easy reach from Bastrop.

In front of the impressive glass-walled office that fronts a large manufacturing facility in Bastrop’s Industrial Park, Phil Greeves offered a succinct sentence of appreciation to community members who had gathered for a ribbon cutting.

“Thank you for taking a chance on us,” said Greeves, who is the president and CEO of Georgia – and now also Texas-based – JAMCo, the business that constructs aluminum curtain-wall infrastructure for windows for hi-rise buildings. (The company’s initials stand for Johnson Architectural Metal Company, named after the founder, George Johnson Sr., who was present at the ceremony.)

Greeves was addressing area business and community leaders who had gathered for the ribbon cutting at the Industrial Park. He was joined by several JAMCo officials, including company founder George Johnson Sr., Willie Johnson, his son and current co-owner of the company with his brother (George Sr.  is retired), Chief Financial Officer Phil Reames and Executive Vice President Van Nguyen.

Dave Quinn, executive director of the Bastrop Economic Development Corporation, and the person who helped lead the efforts to attract JAMCo to Bastrop, made the initial remarks introducing Greeves to the crowd of about three dozen people.

“JAMCo has been a catalyst for expansion in the Industrial Park,” Quinn said. Indeed, Greeves responded that the “project grew and grew,” referring to adding more employees to the Bastrop facility much sooner than the company had anticipated. “Today, as we cut the ribbon, we have 89 (employees)…and this is just a start,” Greeves exclaimed.

After the ribbon cutting guests enjoyed a tour of the facility – work is already underway shipping orders to current projects in Houston and Austin – and a delicious food buffet catered by the new Chick-fil-A. During a break from greeting guests, Willie Johnson sat down for an interview.

"The scope of the (Bastrop) business has been getting bigger since its inception,” Johnson said. He added the company was appreciative of the friendly spirit and the financial incentives that Bastrop officials had offered.  “The BEDC welcomed us with open arms and offered us spectacular incentives,” Johnson said. “I’ve always heard how friendly it was out here in Bastrop and I’ve experienced it first-hand.” Johnson explained that the financial incentive included rebating the cost of the land to JAMCo, after it had fulfilled its promised employment figures.

“We see and hear of lots of localities that seek to attract new businesses, but Bastrop ‘put their money where their mouth is,” Johnson said in an emphatic tone.